Since a couple of years, I’ve been staying at an apartment that is close in proximity to an area I like to call “Dutch Soho”. I see many ladies still in their horse riding boots drinking one chardonnay after the other and exchanging the latest weekend gossips of the sports clubs. Just like actual Soho, people here visit a plastic surgeon as easily as they visit the shopping mall. I don’t mind a skin lotion here and a spa visit there because I am a city girl at heart but I draw the line at plastic surgery. I think women are just pretty the way they are and don’t need all these enhancements to make themselves look prettier.

I do want to discuss noses for a second. Mine isn’t  perfect and there is probably something to be said about it but for now I want to talk more about Truffel’s nose. It’s cute, tiny and black. One day it’s wet and the other day it feels like sand paper. I love it so much when she presses her nose against my neck lovingly that I lose my reason. However, when Truffel presses her nose in horse manure, which is quite frequently, I lose my temper. I’m convinced that her nose tells her there’s a treat to be found at miles distance.  She also has a nose for being naughty and pretending she’s done nothing wrong. That nose of hers is perfect, or is it? 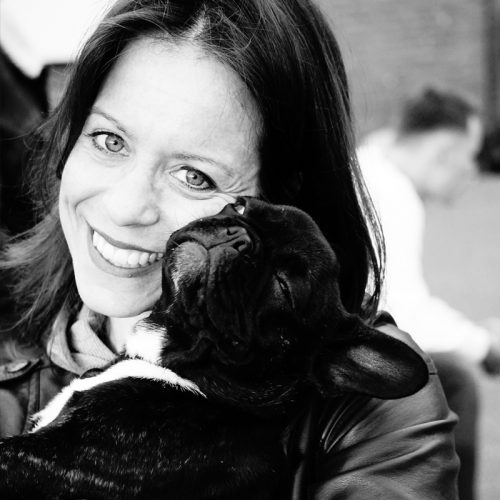 Sadly upon closer inspection by the veterinarian, it seemed that Truffel’s nose wasn’t perfect. Just like many French bulldogs, Truffel’s nose was somewhat too small, which means that she can’t breathe well. The best option was to do a nose job. And so, on a sunny morning, I delivered the nervous dog to the vet for her operation. She tried to fight against the anesthesia, but her eyes fell shut. I hoped she’d forgive me for everything. How do you explain to a dog that it’s for her own good?

The operation went great and she was already running around like her old self when I came back to pick her up. The only difference was she had on a dog cone around her little head which caused her to bump into everything. She got used to it soon enough and returned to her naughty old self.

And I? I was walking around with Truffel and her silly cone in Dutch Soho. Now technically I could also discuss the surgeries and the nose jobs. Not that I wanted to talk about it but I did get a few chardonnays out of it.